This morning I doddle at home so I can catch the latest news at 7:30 AM. I learn that Pennsylvania has ensured Trump’s win. To my own surprise, I burst into tears. I repair my make-up and go to work. There, I discover I am the office political commentator, being the only American here. “What happened? How could America vote for Trump???” they want to know. “We can’t understand it. It’s inexplicable,” they say. And I reply, “No, it’s explicable.”

Because it is. I am not surprised, just incredibly disappointed, because this what not the outcome I had hoped for.

So I begin to answer my co-workers. I, one who rarely bothers with politics, surprise myself by having any answers at all. Thank goodness for all the memes and links on Facebook!
One thing I found was map that colored the political US according to county, not state, and instantly the Pacific and Atlantic coasts and a few major cities not on the coasts were colored Democratic blue, while the vast space between them was Republican red. And in that vast space are dying towns, low-income people, low-educated people and an increasing number of jobless.

The maps after this election are pretty similarly colored. (Screenshots via the L.A. Times.) 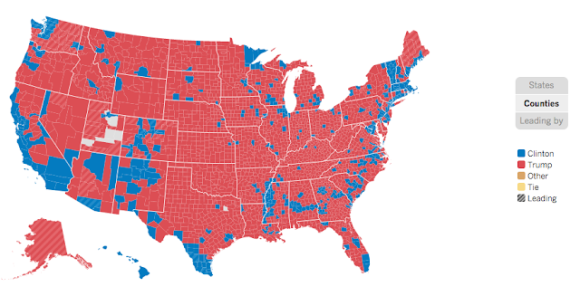 All over this nation, you have good people, who are not racists or uneducated or even white, who will vote Republican, no matter what—because they always have. The loyalty continues even though the Republican party today is not the one they cut their political teeth on; it no longer keeps a sharp eye on government spending while giving individuals the right to decide for themselves. Now, it bloats government and has gotten especially invasive when it comes to religion, same-sex marriage rights and women’s health.

I think that’s why Hillary didn’t win. In a nation of people who get all their news via soundbites, the short sentences and short words and short temper Trump uses are easier to relate to. Hillary sounds like the college-educated politician she is: Using sentence structures that are familiar to a reader, and words that are familiar to a government bureaucrat. I’m not saying she’s hard to understand. I’m saying she’s challenging to someone who is used to being informed via FOX News. And it can seem like she doesn’t understand the struggling folks when she doesn’t sound like them. (Another possible reason she didn’t win, can be that third party voters are more likely to be liberal and take votes from the Democrats.)

Too bad. Everything I’ve heard about her suggests she does notice the struggling ones and has a history of championing their causes. But, then we have another reason she lost: She’s a woman.

It has become quite clear to me with all the articles and tweets about rape culture (for example, #yesallwomen) that the US is misogynistic. Sorry, long word; let me try again: The US hates women who don’t stay home with the babies they got getting raped because they asked for it. (Yes, the right-wingers are that rational about the issue… *sigh*)

I have believed for a long time that the US is devolving into a Dickensian version of itself. It is backsliding into a developing nation, not a developed one. The inequality between the races, the oppression of women and people of color, and the ever widening gap between rich and poor, with the ever dwindling rights and opportunities for the latter (and a good portion of the middle class, too) are all qualities not associated with a well-run, industrialized and democratic nation.

How do you fix something like that? To paraphrase Einstein, you don’t solve a problem using the same thinking that caused it. So many Americans put the blame on the politicians and so a man who is neither a bureaucrat or politician, nor someone who has worked in those areas, looks very attractive. They think he can fix what earlier political decisions have broken because he’s not those people.

I think I cried because I know my sorely divided and abused country of birth needs unity, trust and equality, and a government that will provide that and the safety nets people need. (How can you have the right to pursue happiness if you are denied resources like education and healthcare, for example?) Worrying about that being less likely to happen under Trump than Clinton, has had me reacting like this for a bit:

I do not see Donald Trump as a healer of the great America. But, Trump has surprised us once. I hope he surprises us again.