A struggling friend reminded me of a situation I was in the autumn after my dear grandma died. Re-reading that gave me a surprise: I’d forgotten how down I was then. I remember crying during the meeting with my bosses, but I don’t remember taking sick days and waking up angry every day.

But yes, it all ended up well, better than expected, and yesterday, as I told a potential boss about my strengths and weaknesses during a job interview, I could honestly say I didn’t lose my cool with customers or co-workers any more. “I have no reason to be angry at work,” I said.

Today, I woke up feeling pretty good, and I mused on the messages in the book I am currently re-reading (here is a description of my first read), and my praying to the Holy Spirit yesterday, and that the interview went swimmingly—personality test and all—and it hit me: I didn’t second-guess myself after it was over. I usually find some fault with how I interact with people after the fact, but not yesterday. Not this morning.

This is a new twist in how I approach spiritual guidance. From the god the Church told me about, to an amorphous universe-as-god as defined by new age affirmations, to the Holy Spirit of “A Course in Miracles” (that link requires a fresh cup of coffee before you start reading; it’s from the book).

Yesterday, I was in the zone, a zone I’d made possible for myself by praying to the Holy Spirit for guidance first.

And as I re-read that last line, I remember how “the Holy Spirit guided me!” would make me cringe when I was younger. Because the only Holy Spirit I knew of was the version the Christians kept trying to sell me, and that version had all sorts of add-ons that I simply could not swallow: Memorizing Martin Luther’s Small Catechism in school (that’s no longer required in Norway)… Quiet, cold churches with dour reverends… original sin and tag, you’re it, and no, you can’t opt out… God loves you, but you’re still weak and useless… Don’t even think about sex… Jesus died on the cross for your sins and has given you eternal life…

Wait, what? Eternal life, but still weak and useless? I don’t get it.

I remember childhood bible camps (because only the religious would want a building full of someone else’s kids for a week, apparently), one wet summer full of blueberries and not much bible reading, one snowy Easter with a thorough review of Jesus dying on the cross. That one event so crucial (see what I did there?) to Christianity. The whole reason for the religion in the first place. And Easter.

And I could never understand it. I could never wrap my head around how Jesus dying on the cross absolves us of all sin and grants us eternal life (and yet we still have to keep praying for forgiveness). I remember that snowy Easter, somewhere up on a hill above the train tracks between Bergen and Voss, hanging on the camp instructor’s every word in the evening after a day of skiing, hoping that, finally, after all these years of exposure to Christianity, I would understand what it was all about. And the fingers of my 15-year-old mind, my clever mind already exposed to metaphysics and ancient cultures and so no stranger to higher thought, reached out and grasped the words and the imagery—and for a moment I had something, but the fingers opened and there was nothing.

This morning, 38 years later, reading on my Kindle, I read about how the resurrection wasn’t about bodies, but minds, and Christianity got it all wrong. Then I read that when you are ready, the Course (in Miracles) finds you. And the Course is partly about undoing the mistake Christianity made.

I started to grin, realizing that never grasping the message of Easter was not a short-coming, but an unwavering guidance towards the truth. For some reason, somehow, I have been consistently steered away from traditional Christianity. No small feat, considering where I grew up: In a country that until May of last year, had a state church, still has the cross in its flag, and also used to have Christianity as a regular class in school (Christianity and religion history, actually). Norwegians still baptize their babies and the teenagers still get confirmed because it’s tradition and one can’t break tradition.

I always stood on the outside looking in. As a foreigner, I was not an automatic member of the state church (Evangelical Lutheran, in case you were wondering), and I was the only one in my class and circle of friends who did not go to confirmation classes nor did I get confirmed. I didn’t believe in that Jesus dude and his loving but critical dad. And I was tired of battling sin. Of feeling I could never measure up to what God wanted from me, whatever that was.

So I turned away from all things Christianity. I couldn’t understand it, and nobody could explain it to me. Fortunately, I had family members with a spiritual bent, who also had books with alternative explanations for who we are, why we screw up, and what to do about it, who were also searching for a better and greater meaning. I searched too because I wanted something spiritual in my life. I like having someone or something to pray to. In fact, I need to have that.

In high school, I met a devout Christian girl, and I can remember a moment during lunch in the school cafeteria where I had my “Yes, I believe! I accept Christ!” moment with her. But as born-again as I was then and there, the moment I was given the metaphor that Jesus does all the driving (rather than I do the driving and Jesus reads the map), I lost my new-found salvation and went back to ignoring Christianity again.

I just didn’t want to lose control, to not have some say in my own life. Of course, the problem with Christianity is that Jesus in the driver’s seat means you’re chaste and prudent and plain and sober and not having any fun, especially not before marriage. Who wants to hand over their free spirit to that?

Christianity got one last shot: After my grandpa died (death always makes one spiritual, I find), I welcomed two American Mormon missionaries into my home. Sweet girls in long, unflattering skirts, but with lovely personalities. In between them telling me about their religion, we talked about other stuff, made dinner together and generally enjoyed each other’s company. It’s been almost 20 years, and I do hope they are happy. However, back then, after several months of visits, I finally had to make a decision about whether or not to be baptized and become a member of their church. But you know, long, unflattering skirts, marriage, kids and homophobia just aren’t for me. So I thanked them for all their time, and bowed out.

For a while I felt lost again. I wondered if I’d made a mistake. They were so happy, you see, and I wanted that. That happiness. That contentment, that community, that assuredness. But I couldn’t get into the highest most heaven because I’d had sex before marriage, so once again, I felt I couldn’t be what Christianity wanted me to be. I had to search elsewhere. I had to trust that the amorphous god metaphysics had introduced me to wasn’t steering me wrong by steering me away.

I was already learning a vital lesson, however. It’s not the religion. It’s the people. Those Mormon girls were deeply religious but as people, they are some of the nicest I’ve ever met. If I were hung up on labels, I wouldn’t have known that. We need to focus on the humanity in each of us, not how we’ve chosen to go through this life. Atheist or religious, conservative or liberal, cautious or reckless, male or female—these are not what matters. What matters is realizing and accepting that under our skin, beyond where our physical lives have landed us, we are all the same. We share the same core and the same source.

And taking that a step further brings us to the message in “A Course in Miracles”: How the appearance of being individuals and the worship of individuality are huge missteps. And the way to correct that, to perform a miracle as it were, is to start seeing the innocence in others.

That is a fascinating idea. And a rewarding thought experiment. By choosing to see others as innocent, as not conscious of how they may be hurting me—in other words, making the same mistake I can and do make—creates a shift in myself that brings a feeling of peace. It calms me. It releases me from—something. I can feel something inside me let go, stop, and leave me far less agitated, far less worried, far less angry. Just by giving the other guy a break.

Resurrection:[…] a reawakening or a rebirth; a change of mind about the meaning of the world

I have found a new way to approach Easter: It is still about resurrection, but now I realize it is about resurrecting goodness and truth, not bodies. The Easter message is that there is no error that can’t be undone. Everything can be fixed through forgiveness. If not directly between people, then certainly through the Mind that joins us all on the spiritual level. We can resurrect ourselves and each other using this process. As I let go of my belief in that errors are facts, the world gets more loving and safe, and I with it. 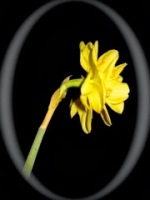 3 replies on “That Easter thingy”

Re photos: Daffodils are called Easter lilies (påskelilje) in Norway.

Thank you! Yes, it did. 🙂 I'm rather relieved, actually. I like having clarity.PS: I tweaked a sentence in the last paragraph. Made it make sense. 🙂 Easter is definitely about undoing errors!