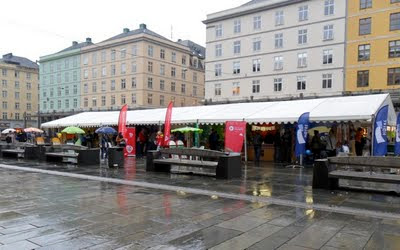 My high school teacher told us students that we may not have anything to vote for, but we always have something to vote against. That statement has often been the only reason I have bothered to vote.

In the US it is easy to find who or what to vote against. Most questions there are yes/no: The Democrat candidate? Yes/no. A yes means the Republican candidate gets a “no”. I definitely voted against Jimmy Carter in 1980, and against Sarah Palin in 2008. I have no vested interest in the candidates who got my “yes” since all presidents annoy me (they just do), and since I know that politics – and the presidency – tend to be like farming: Hard to do without producing a pile of manure.

Now, the US does have more than two political parties and they often offer presidential candidates, but due to changes in how the presidential debates are held, you never hear from them.

In Norway, as with most European countries, there are several political parties. Norway has seven that offer the usual gang of idiots in our parliament, and a couple of minor ones that sometimes appear on a national level. There are also strictly local parties, like Bergen’s “The City Air Party”, formed this year specifically to deal with the ever-increasing air pollution that settles on us during winter months when we have high pressure systems and no wind.

My challenge, as a foreign citizen with the right to vote locally, but not nationally, is that I do not have the option of voting against anyone. There is no “against” in a system where the seven parties can form coalitions if no single one of them wins enough votes to rule alone. (Norway’s current national government is a three-party red-green coalition.)

Norwegians hold the idea of “secret ballot” very dear, to the point that no one will tell me exactly how they vote so it’s a bit hard to discuss politics with people outside of family and close friends. I therefore have to figure out who to vote for on my own.

My lack of admiration for Bergen’s current right-winged government had me sniffing around the middle where I usually fall politically, but the parties that tend to occupy that space haven’t been impressing me, either. So I read the programs for parties that lean to the left. The one that offered concrete plans for Bergen and Hordaland (our province) in plain Norwegian got my vote. No, not the Labor Party. I am not swayed by this summer’s events here, so no sympathy voting for them.

Norway has managed to avoid the financial crises that have affected the US and the EU. Norwegians themselves have a lot of money to burn, and it’s a materialism I’m not happy to see develope. We’re turning into America, with an attitude that as long as the indiviual can enjoy a cushy lifestyle, who needs a competent government, let alone pay for it.

Inspired by Thatcherism, Norway has fiddled with privatizing certain public services, like home nursing and park services and snow clearing. Some parties want to privatize more. My attitude is that some things should never be run for profit (like schools and hospitals) and some services need to be available to everyone, regardless of income level (like schools and hospitals).

One issue that matters to me as a voter is that, as someone without a car, I want a viable city center and good bus connections to it. Norway loves to emulate the US, and Norwegians have a similar love affair with the car that Americans do. The result is that in a city center that holds half our city’s 250,000 population, there is no place to buy a sofa – with the exception of a few expensive designer boutiques and the Salvation Army. Everything’s been moved to suburban shopping malls. What stores are left in the city center are struggling. I hope for better and greener city planning. Dedicated bike lanes would be nice. I hate being surprised by cyclists on the sidewalk. 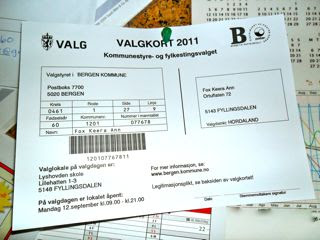 Election day this year is September 12, and on that day we raise the flag and our government-run liquor monopoly stores are closed. (Norway in a nutshell, that.) However, we have early voting, so I took my voter’s card to the local library last week and stuffed my envelope with the candidate lists for the almost-communist party. They are one of the coalition parties in our national government and I don’t really like them, but this election year they are the party that annoys me the least.

8 replies on “Aiming for the smallest annoyance”

I bet it felt good to get that behind you personally — and won't it be a relief when the whole thing is over in just a little over a week?

Oh, you are so right! That's why I voted early. Couldn't stand the whole decision-making and just wanted something to happen. I am very curious about the results next week. I doubt I'm in step with the rest of the nation. I rarely am.

I always find myself voting for the lesser of two (sometimes 3) evils. Now campaigning starts as the election ends and never stops. I figure as long as I vote I have the right to complain if things aren't going well. Are they ever? I hope your least offensive candidates win.

Dear Keera, like you, I can only vote locally in Denmark, which is highly annoying. Being a Swedish citizen, I can vote in Sweden, but I never do as I have not lived there for over 20 years and have no clue about politics there.;) However I do have a clue about Danish politics and as I am integrated into the society, not being able to vote is very frustrating. To the point I have been thinking of becoming a Dane.;)Our own election here in Denmark is coming up on the 15th of September and it seems we are facing a shift after ten years of right winged government.xoxo

I am so disgusted with politics here, both the process and the pile of slimeballs (from both sides) we have to choose from. Sometimes I think about not voting anymore, but that seems so wrong, so I won't do it. I imagine that my vote from now on in all elections will likely be for \”whoever I hate slightly less at this moment\” than anyone I like or respect. Maybe having more viable parties like y'all do would be better, idk.

The communists won. Look at china. The pollie who annoys me the most is the jumped up squirt who controls North Korea.1980 was a lousy year for politics in Queensland, in Australia and in the anglosphere, imo. We had Joh Bjelke Petersen, a crypto-fascist, Premier of Queensland. Malcolm Fraser the Prime Minister who was in love with Ayn Rand. Shrill Thatcher and Reagan.Things haven't improved much in Oz. Our Labor government has 20% approval rating, a triage case; pretty much the same for the Queensland Labor gov.Our next Prime Minister will be, I guess, the opposition leader Tony Abbot; he has a charisma bypass and is as fiercely Catholic as Mel Gibson. A drovers' dog in the wings for when the people vote \”against,\” as you eloquently put it, Labor.

Are you going to post an update? Your take on the results?

Jon, that's about how I approach politics, too. If all else fails, I at least retain the right to gripe. I can tell you that I am happy I don't have to live through over a year of muck-slinging, I mean, campaigning!Zuzana, I hope you are happy with Denmark's election results this week! I am very curious about Denmark now departing from the righ-twinged trends of the rest of Scandinavia, and what will happen during the coming parliamentary period. Paula, from where I sit, one problem is that there is too much party loyalty rather than voter loyalty. The stubbornness displayed this summer regarding the debt ceiling is a case in point. The lowered rating from S&P was a message to the US to stop letting the kids run everything. How voters can fix this, I don't know. Perhaps by gravitating towards the middle again (if it still exists)?Bob, your 1980 dude has such a Norwegian name! Ah, I see he was of Danish descent. One nice thing about Australian politics: They remind me that the stupid is global, which is oddly comforting. (If you want cheering up, watch the US campaigns. 😉 )Alice, the two biggies (Right and Labor) got the most votes in Bergen and elsewhere, My take on that result is that people wanted the tried and true and some guarantees. The party I voted for lost big time; they haven't survived their years in the coalition and all the compromising they had to do. The very right-winged party that the BBC keeps linking to our terrorist (shame on you, BBC) also lost votes.Locally, the Green party and the very local City Air party both got representatives so I hope Bergen will no longer be Norway's smog capital.