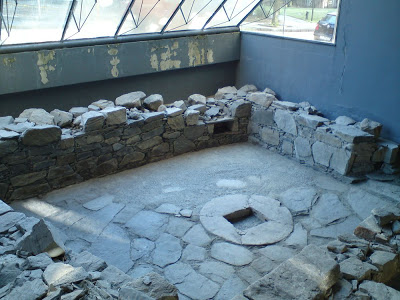 I love when they do this.;) In my city there is a site like that underneath a Bank.;) One can walk down from the Bank into the subterranean and there are excavations of the old city.;)Have a great Wednesday dear Keera,xoxo

Unfortuantely I can't read Norge. Eep. But anywho, that's really cool. Did they build the building over the site knowingly or did the discover it when they were building and added on the roof for it.max['That's really cool!']

Zuzana, the first time I noticed archaeological sites and ruins in a modern city, was underneath shops in Rome. I love the idea and I'm so happy we did it here.Max, IIRC, they tore down an older building to put up a new, discovered the walls (they aren't that deep down), and with some private funds and the developer's blessing, chose to \”donate\” the first floor to keep the site uncovered. The glass \”awning\” was made to protect the site.Archaeological stuff is often found when Bergen starts digging to replace old pipes or prepare a site for building. Our procedure is to halt the work for however many weeks the archaeologists need to explore and catalog and document, and then everything is buried again. There just aren't enough museums to hold all the stuff, so it's better to leave it in the ground, which is a good conservationist.

with some private funds and the developer's blessing, chose to \”donate\” the first floor to keep the site uncovered.Well, that was awful nice of them.There just aren't enough museums to hold all the stuff, so it's better to leave it in the ground, which is a good conservationist.Makes sense but wow, that's an amazing amount of stuff not to have access to. I guess I should've expected it, since Bergen has been there for a long time, so it makes sense there's a ton of stuff under the ground.max['I guess I'd have expected the old city to be smaller.']

The original old city is small. It's about 6 x 4 small blocks big. We're talking \”original\” as in prior to 13th century. But since people have been living on that spot since the 800's (viking era), yeah, there's a lot of what archaeologists love: Somebody else's garbage. 🙂