It is perfect weather out today. After two days of a hard north wind, the air is calm, but the sky is still clear, and the sun still warms. It is the perfect walking weather. And because it is 2010, I walked to my grandparents’ grave. 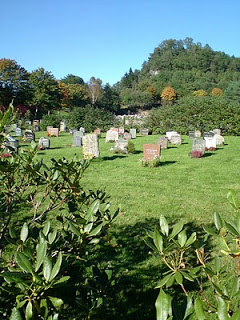 The Norwegian custom is to bury the dead, primarily, though cremation is more common in crowded cities (and their equally crowded churchyards). Norwegians usually tend the graves themselves, with one of the more beautiful customs being a lit candle on the grave on Christmas Eve. I have never done any of this, but part of the funeral costs included gardening services from the city so the grave is always tended. The dead here are not embalmed, so their bodies do return to dust, as the Bible says. The usual is to reuse a grave after 20 years, when there is nothing left of the previous “resident”. Exceptions are made for historical graves and family plots.

I don’t care either way. I am ambivalent about visiting graves. Mostly they remind me of new memories that won’t be shared, and of new acquaintances not made. I always bring a hanky. I know I will cry.

Because it would have been Grandma’s centennial this year, my Sunday walk took me to the churchyard. I entered it from the top of slope it occupies and walked slowly down, noting how the churchyard was filling up, going up the slope.

I walked down the path closest to the road and sought out the characteristic triangular headstone of a dear friend of mine. My best friend at the time. Dead of a heart attack at age 45, in 2000. I stared at the flowers on her grave, and a little “nisse” (Norwegian leprechaun) figurine someone had left. It looked like it might belong to a child. I thought of her granddaughter, a girl who would never know her grandmother, and the thought made me sad, because her grandmother was such a wonderful person. Warm, friendly, caring and cheerful – but with dark sense of humor I enjoyed. And best of all: She accepted me as I was.

A little farther on, I past a grave marked with a wooden cross, used until the ground settled and could hold a headstone. The name surprised me: It was that of a young man who’d been stabbed to death this summer, creating a lot of headlines in our local paper. I felt so bad for his mother, having to bury her son before his time. In a churchyard, there are many who didn’t make it to old age, but rarely do strangers know why.

My grandparents’ grave was at the bottom of the slope. The grass there smelled incredibly sweet in the sunshine. I squatted down, straddling the two graves, knowing the empty space to the left of the headstone was Grandma’s, while Grandpa was directly beneath the stone. I heard Grandma’s voice ask me to take my sunglasses off so she could see my beautiful eyes, and with a smile, I complied. It was such a familiar request.

I sat staring at the names: Johan Arnt and Marion Naomi. Grandpa didn’t like his middle name Arnt, but I’m not sure why. However, I did once come across some unsavory Norwegian Nazi by that name. Maybe that’s why. Johan changed to John when he made an American of himself. I thought about his parents’ grave. I remembered that his mother and father died within a year of each other, during World War II. Grandpa would not have been able to go home to attend a funeral or visit with family. The Norwegian Merchant Marine defied the orders of the Quisling government and refused to go to any German allied port during the war. Knowing he had had a good childhood, with loving parents and eight siblings he was also very close to, this must have been hard for him. He was always respectful of others and well-liked (even abused animals trusted him), and the love he grew up with got passed on to people not even of his blood: His step-daughter and her daughter: My mother and me.

The young American widow he married was Christened Marion Naomi, and she wasn’t wild about her middle name, either, although I always thought it was beautiful. In spite of a family situation dominated by a mother who was unable to show love for her female children, my grandma turned into a loving woman who genuinely liked all sorts of people. Grandma made friends very easily, and she always asked for their names (she told me this was deliberate, after meeting someone who told her the worst about a concentration camp was being reduced to a nameless thing, a number). I remember one friend she made during her last months at the nursing home because that woman cried and cried at the funeral and I could see she really was sorry Grandma was no more. Grandma became a mother to me when I was 7, and instead of enjoying retirement, raised yet another daughter and that in a foreign country. I had a good childhood with my grandparents, and Grandma was, amazingly for her generation, very open with me about all sorts of things, including sex. I miss our conversations. I told her everything, and I do mean everything. 🙂

I sat at their grave, missing our conversations, musing on this being the year Grandma would have been 100, trying to remember what she and I did on Grandpa’s 100th birthday. On their headstone, only their years of birth and death are listed. I knew it was a deliberate choice, but I got to thinking about the absence of the actual dates. So here are their birth dates: Hers is September 22 1910 and his is October 7 1901.

The sentiment on their stone – “Takk for alt” (“thanks for everything”) – may be a cliché in today’s Norway, but those three words are the best way to sum up the significance of what they did for each other and for my mother and me.

I just wanted you to get to know them a bit better.

6 replies on “I want you to know them”

What a lovely, lovely tribute.And I love \”Takk for alt.\” Elegant and beautiful.

Lovely. They were wonderful people.

Grandmothers of that generation are really something. I regret I didn't push to get to know mine better (1902 – 2000). (IMO grandmothers of the next generation typically leave much to be desired. I still have hope for the next one yet — that would be us.)My brother's grave location is unknown. My father has chosen to keep it to himself, following some agreement or other he had with my mother, for, what, fifty one years now. I hope that when he goes he leaves a means for the circle to closed, but that is his decision.Graves mean little to me. Maybe this is a legacy of the West's somewhat haphazard quilt of traditions or lack thereof. It sounds as though they keep it meaningfully simple in Norway.Thanks for sharing.

Thanks, all!Don, I'd ask your father. There were things I wished I'd asked more about at the time. Once they're dead, that's it. Information dies with them.

that was a nice post, Keera, i remember once at the airport saying takk for alt to my uncle, and he laughed and sied thats what they right on gravestones. now I know. not the same in translation. stor klem jeg savner deg.