A little change in routine, and I suddenly find myself with a new delight. 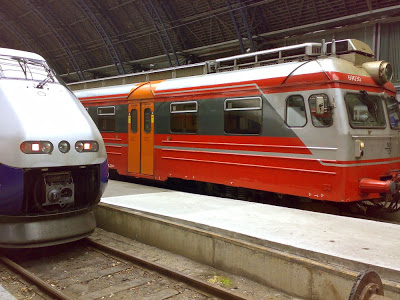 My acupuncturist’s office is right next to the rail yard. The most convenient way to get to my bus home is mostly under a roof: Through the train station, the adjoining shopping center and bus depot, down into the underground pedestrian tunnel. I am exposed to the elements only during the one block from my acupuncturist’s building to the train station, and the same stretch from the pedestrian tunnel to the bus stop.

Today I took a different bus to town and ended up experiencing rush hour traffic on different streets, and arrived much earlier than I expected. I found myself people-watching as I walked the pedestrian tunnel, caught the only rush-hour traffic of my day – in a long line of pedestrians – and continued to enjoy being part of the crowd through the shopping center and into the train station.

That’s where I decided to stop and wait. According the signs in front of two trains, passengers should be bording, but weren’t. A large man in a bright red shirt sporting a huge lower-case “i” (the same used for the tourist information office) paced a bit by the chain blocking passage. The passengers waited patiently in the characteristic clumps Norwegians choose (whereas the British, for example, would form a neat line). I decided to wait and see when everyone could board simply because I was very early for my own appointment.
A small electric truck with a flat bed and labeled “porter service” drove into the train station (which has a big, glass roof, but is otherwise open to the outdoors) towards the crowd, stopped by a young man wearing headphones who was facing away from the truck. Silently the truck waited. A woman about my age moved herself and her suitcase out of the truck’s way, giving its driver a big smile, as if to say, “See, I saw you and I’m helpful.” The young man was still oblivious to the machinery behind him. The headphones were blocking the subtle sound of the electric engine. I thought to myself that if the woman really wanted to be helpful, she should have tugged the young man’s sleeve and alerted him. Something finally made him turn, and the porter could move on.

Ten minutes late, the man in the red shirt got to move the chain aside and the passengers quickly moved towards the two trains waiting for them.

As I was leaving, the red-shirted “i” man had taken a seat off to the side and had hailed one of the conductors who had been on on of the delaying trains. I heard him ask what the hold up had been, but was not close enough to hear the softer-voiced conductor’s answer. And I was moving by now, on my way to another treatment.
The acupuncture is getting interesting, by the way. Now, if my stomach gets upset, my shoulder hurts. Heh.

What an interesting post about people and trains. I love to observe people as well and I love train stations.;))xo

Thank you, Protege! Train stations have their own appeal, don't they. They marry days gone by with modern life in a way bus depots and airports never can. Even when the train is new, the tracks look much as they have for 150 years.