Once upon a time I took a trip to Dresden and Berlin. It’s time I finish that trip, and show you Berlin.

We did a bus tour in the morning, whizzing by many beautiful buildings, like the building that houses the DDR museum (see how badly people lived in East Block times), the Humboldt University and Gendarmenmarkt. The significance of these buildings were lost on me (too many, too fast) but not their beauty, so I made a note of where we were on the map so I could revisit. 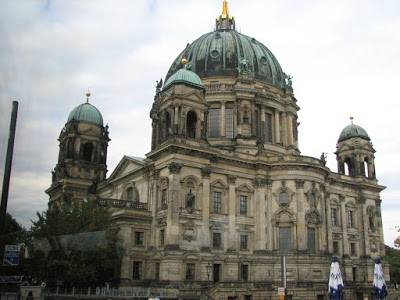 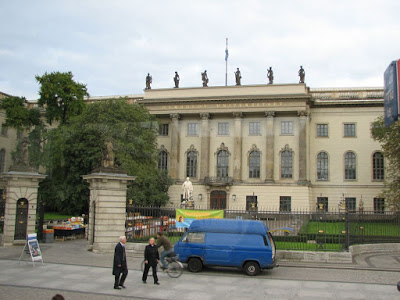 On to more famous places like Checkpoint Charlie, which is now a mere tourist attraction with actors posing as guards: 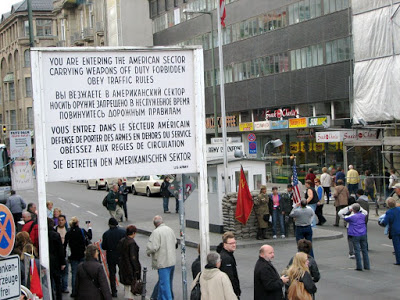 I can’t begin to tell you how bizarre it is to see that famous sign now surrounded by Western modernity and freedom, knowing that that sign used to mean freedom or death to those able to get close to it.

The Berlin wall was quite modest but the 500 meter wide swath of land behind that mined wasn’t. Nowadays, that land is being reclaimed so you see a lot of open lots like this: 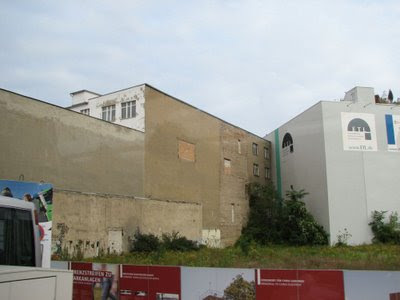 Where the Berliners are busy restoring or rebuilding, they’ll erect a huge picture on one side showing what’s to be, while on the back is only the scaffolding. 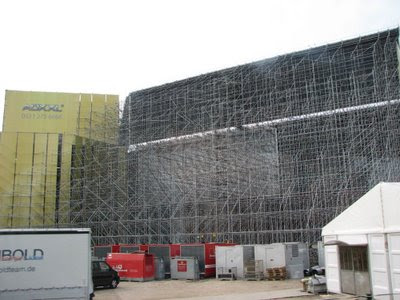 One lot that will never be reclaimed or built upon is where Hitler’s bunker once stood. The area is left in place for two reasons: Nobody wants Hitler’s bunker as an address, and no one knows how to remove the solid concrete structure buried beneath the dirt. I’ll give them that: Those Nazis sure knew how to build for the generations. We have a lot of bunkers still dotting the Norwegian countryside. 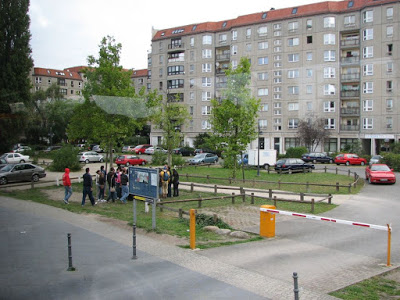 I’ve mentioned the Trabbi (or Trabi) before. Here it is the ultimate tourist attraction, used to show Berlin to tourists. Appropriately, this one is standing next to a tiny section of the Berlin wall.

And the one thing everybody else on the bus wanted to see, but which produced a mere “meh” in my reactions though I think that if I had more background at the time, I would have enjoyed it more: Brandenburger Tor (Brandenburg Gate). Now I know that it is an old city gate, and stands between the Reichstag and the start of Unter den Linden. As “gates” go, this one is darned beautiful.

The old Reichstag has been reclaimed and renamed Bundestag. The government area is quite modern and must be an architect’s delight. The Bundestag has a glass cupola that visitors can walk around in. Like a lot of points of interest in Berlin, there is a long wait to get in. 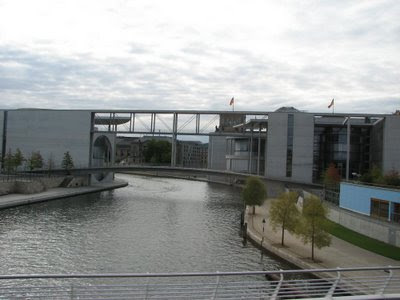 I had a bit of trouble finding a title for this post. All of Berlin is history, and especially World War II and cold war history. Yet today, as we drove past one place name after another recognized from history books, it was all reduced to “point of interest”. I take comfort in that they are points of interest because of their association with a couple of the biggest mistakes mankind ever did to itself. As long as people are interested in these points of interest, we won’t forget, and hopefully won’t repeat those mistakes.

Here’s a new name to add to the list: The Holocaust memorial. When I saw what a labyrinth it was, I chose not to visit. The symbolism of not having a clear path shows how lost humanity can get.

4 replies on “Berlin and points of interest”

Have you ever seen the German movie \”The Tunnel\”? It\’s supposedly a true story about people escaping from East to West Germany just after the wall went up. It\’s got one or two poor reviews I think (and one or two excellent ones!) but I really enjoyed watching it. Berlin\’s not on my list of places to visit although if the opportunity arises, I\’ll definitely go. For WWII history I am going to visit the Normandy beaches one day and definitely before I die. My father landed there with the yanks on D-day (special RAF attachment – his job was to get radar working asap to detect the Luftwaffe planes the Allies expected to attack the beaches).I miss Europe – so full of history!

I may have seen it or something similar.Berlin wasn\’t on my list, really, but now that I\’ve been, I want to go back. My WWII history is tied up with Norway, since that is where my grandpa is from, and his sailing in convoys across the Atlantic during the war led to him meeting my grandma in New York.The big Christmas movie in Norway this year is actually a Norwegian docudrama about a wartime resistance man, Max Manus.

I\’ve just watched a long history report they show on German TV every year. \”100 years\”.Lots on WW2 and tough food it was.What they built there as a Holocaust museum is one of the most stupid things I have ever seen in my Life. I sure wouldn\’t visit it and I don\’t get it.Oh well….I don\’t have to 😉

I get the symbolism of the memorial, which is enough for me. I don\’t know what their museum is like, though Wikipedia shows me a meandering, snake-like building, another example of daring architecture.