After a delayed lunch (through no fault of our own), we finally arrived in Berlin. It was a long drive into the center of town because Berlin is your typical large metropolitan. We drove by the Berlin Wall, and I tried to make a note of what boulevard we were on. When I finally got a map, I learned that we had been driving through the old East Berlin part, right up Karl Marx Allee to our hotel, the Park Inn Alexanderplatz.

Our guide joked that Berlin could be considered one of the largest construction sites in Europe. The view from my 22nd story hotel room confirmed that. (I was actually facing Karl Marx Allee from my room.) 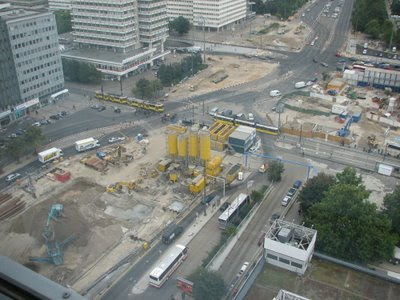 But what I really wanted to do was get out and look around. Unlike Dresden, the drive through Berlin whetted my appetite so I grabbed my camera and went out. It was late in the afternoon and getting a bit dark, but my pictures turned out better than I expected.

Between the hotel and the TV tower is a plaza with shopping centers. I was told that Galeria offered live concerts instead of muzak for the shoppers. Next time I’m in Berlin, I’ll have to go shopping (I didn’t go inside any stores at all). 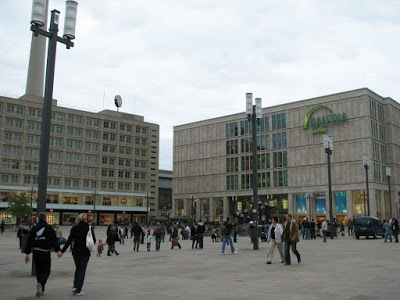 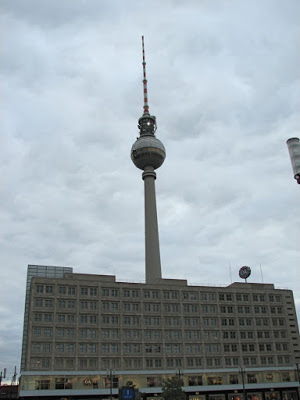 “What happens if it falls?”
“You get to West Berlin.”

That tells you how close Alexanderplatz was to the wall.

Between the TV tower and the river Spree is a park, and on one side of it is the reconstructed city hall, all in brick. I was absolutely charmed by it. It was adorned with several versions of the Berlin bear (the animal depicted on Berlin’s flag). 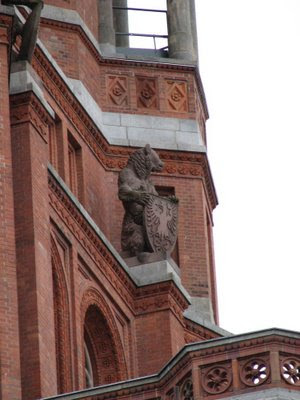 On the other side of the park is Marienkirche (St. Mary’s church), and suddenly the fountains played up while I was standing there.

The next day I wandered around Alexanderplatz, too, with better light, and noticed how pretty the fountain outside the Galeria was, though the shapes the water spray made reminded me of McDonald’s golden arches.

Later I discovered that I could see the Alexanderplatz plaza from my window – if I opened my window and leaned the camera out a bit. And waaaay down there is the subway station.

The Park Inn was a typical business hotel, but what got everyone talking was the evidence that the architects must have taken “en-suite bathroom” literally. The bathroom was not closed off from the rest of the room. What tickled me was that there was only one sliding door that the shower and toilet stalls had to share.

And, finally, Berlin by night – the bird’s-eye view:

Reactions in sequence:Live music in the shopping plaza! That\’s classy.The church is beautiful.The bathroom design is… unique! I guess it makes sense. You can\’t be on the toilet and in the shower at the same time. 😉

The music was inside the store\’s building, actually. I found the church quite charming. And that one door wasn\’t just in the single rooms; it was in all the rooms. That\’s why everybody talked about it. 🙂