Finally! My absentee ballot arrived in the mail. 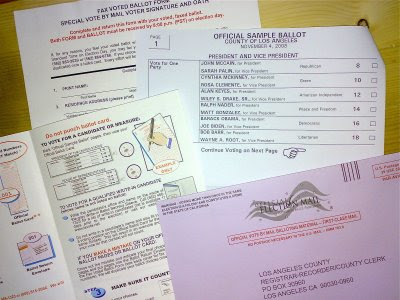 My choices for president are:

Wait. Who are all those other people? There are other choices besides the Republicans and Democrats??? Yes, there are. There always have been. It annoys me more and more that the other choices don’t get any press time, and don’t get to participate in the presidential debates. It annoys others, too.

So, who are these candidates? I know who I’m voting for, and my vote this election is purely strategic, not a true I-like-this-one-the-best vote. But since I don’t care for the two big parties, really, I am very curious about these other parties and their candidates. And I wish that things were not such in the US that I feel the need to be strategic this election. I’d love to vote for whoever I really like and have my vote be registered as such. I guess that would mean ending the electoral system, though.

The strategy is to not drain votes from the party that can beat the party one doesn’t want. I’ve heard that the real reason both Al Gore and John Kerry lost is because people who’d normally vote Democrat, were sniffing around alternatives like the Green party. The Republicans simply experienced less of a drain from its typical voter group in 2000 and 2004.

2008 is a special election, no matter how you slice it. A black man is running for president and a woman is running for vice-president for the first time in US history, and there is the backdrop of the current financial crisis, the mistake war in Iraq, and 9/11. Well, the truth is, Alan Keyes is black and is running for president for the third time, and Cynthia McKinney is both black and a woman and her running mate is also a woman, but of course you haven’t heard of any of these people. I certainly hadn’t until I got my ballot today. Still, the main issue is that the white-men-only stranglehold on the two big parties (and the White House) is coming to an end, and that is indeed significant. And historical.

I didn\’t know America had a Green Party. I wonder if it\’s related to Canada\’s Green Party?

Well, old white men haven\’t done such a hot job, have they? If we could get a decent voter turnout, things could easily change. Maybe this time…..

Good for you, Keera! I\’ve thought about not voting, but I feel too guilty. For a long time, my votes have been against, not for. That\’s a shame.

but of course you haven\’t heard of any of these people.Well, actually, I have. Keyes is running as an R-backed spoiler – he blocked the Constitution Party candidate from being on the ballot on California. That keeps the Constitution Party from drawing votes away from McCain. McKinney is pretty much a standard socialist. Nader is an egomaniac. Bob Barr is the \’serious\’ third party candidate in the race, since he has been vociferiously opposed to the R stance on the War on Terror since he was still a sitting R congressmen. He doesn\’t seem to be getting anywhere this year, since Obama has pretty much got it in the bag, and the conservative element is with McCain, or they\’re just sitting this one out.I\’m voting!Cool!max[\’Whee!\’]

Spark, I wouldn\’t know. Probably not. There are only so many names in the English language, y\’know? :-)Jon, I think voter turn-out will be bigger this time.Paula, voting against is good. :-)Max, you are exceptional. 🙂

Why, thank you dear!max[\’Wow. Lotta water under the bridge since then!\’]