I wrote earlier about a frustration I have being foreign, which involves getting a new visa in my passport. I have permanent residency, so it’s just a matter of constantly renewing the official stamp in my passport that says so. And it was indeed a breeze to use the local police station. (The queue ticket amused me.) 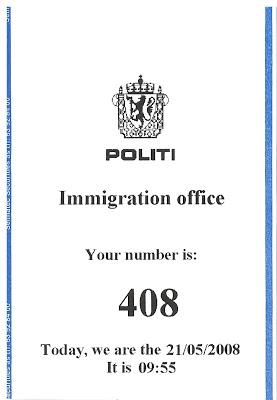 After a pleasant walk from home (with camera in tow), I made it to the office building with the sign that said “Police, 2nd floor”. Of course, in their usual helpful way, the Norwegian woman behind the counter confirmed that the foreigners go to the other end, but said nothing about the anonymous-looking queue ticket machine. That’s when I understood why the Russian woman in line had grunted in the direction of the machine when I first asked her if she was in line. She didn’t smile no matter what language I tried, but talked up a storm with the woman waiting on her, who spoke fluent Russian. I figured it was going to be a while to wait, because whatever the Russian woman needed to take care of was taking a while, but at least I was ahead of the Asian couple. Then another woman opened up the second window, and very pleasantly took my passport and photo. And not only that, I get to pick up my passport tomorrow already!

After the police, I took advantage of being in the neighborhood anyway, and walked over to the department of motor vehicles (the long, red building pictured above). I hadn’t been there since I got my Norwegian driver’s license, over 20 years ago. All it took was handing over my California license and taking a winter driving course since I was from someplace sunny (the course was fun, but I still don’t want to drive in winter). Then I got my license, with a photo that had me looking like Patty Hearst, valid through my 100th birthday. No, you read that right. Norwegian drivers licenses are for life, but after you turn 70 you have to have annual doctor’s check-ups to keep driving. Thing is, the old style (see the large pink ones here) is no longer valid as ID because it was too easy to forge. And the ID I got through the post office to compensate expired this month. I’m one of the few people whose bank debit card does not show my picture because that would require physically showing up at the bank to verify my identity – and I use an internet bank. Since I need ID and the automobile club complains when I ask for an international driver’s license with my old pink one, it was time to get the new credit card-sized one.

I didn’t realize I had to take a photo there, in their booth, so when my number came up, the lady at the counter told me I had to do that first, making me realize my last 10 minutes were not well spent. I asked her about my place in line, and she said to just come back to her station. So I went to the little booth, all touch-screen driven with a choice of several languages (but nothing for the hearing-impaired), and entered my “person number” (same system as in Sweden), and got two equally bad Patty Hearst pictures of myself. Again. But the first time I did that was more interesting because the photographer then was a hunchbacked man.

Anyway, back to the counter. Empty. An older man sitting near it said he thought the woman had gone to lunch. I glanced at the clock. 11:35 am. Yep, that’s the start of a lunch (half)hour. I waited a bit, more hopeful than I knew I should be because lunch breaks are holy. The old man said I should try another counter because he didn’t think the woman was coming back. So I “snuck in line” at another counter, and the lady there decided I’d asked nicely enough for help and took care of me. I paid for the pictures (which she found in the computer using my person number, naturally) and new license (NOK 262) and got a temporary license, valid for a month and only with some other picture ID. Wait. Isn’t that a catch-22? Good thing I get my passport back tomorrow. 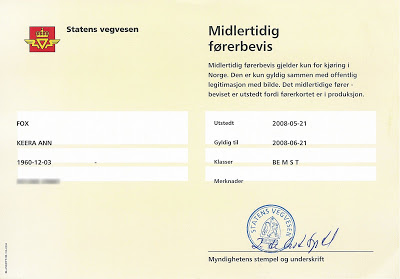